It’s been a wee while, hasn’t it? I’m sorry. I needed a step back to see how things were working out. I would like to say it was A Very Clever and Sensible Decision when really it was a Desperate and Confused Trudge into A Cave Like The Goblin I Am, but c’est la vie. It’s been a year since my last letter and everything is different, so I expect my letters to you will change too. If you’d rather not see-hear me anymore please do unsubscribe – I love you anyway and it’s really quite alright, you know where to find me.

Anyway, I’ll share some short updates, if you can call anything I do short:

I grew my beard out at the beginning of the year, which was unexpectedly Phase 1 in ‘Project Fuck With Gender’ (details to follow). It’s working out quite well so far, and thank you for asking. 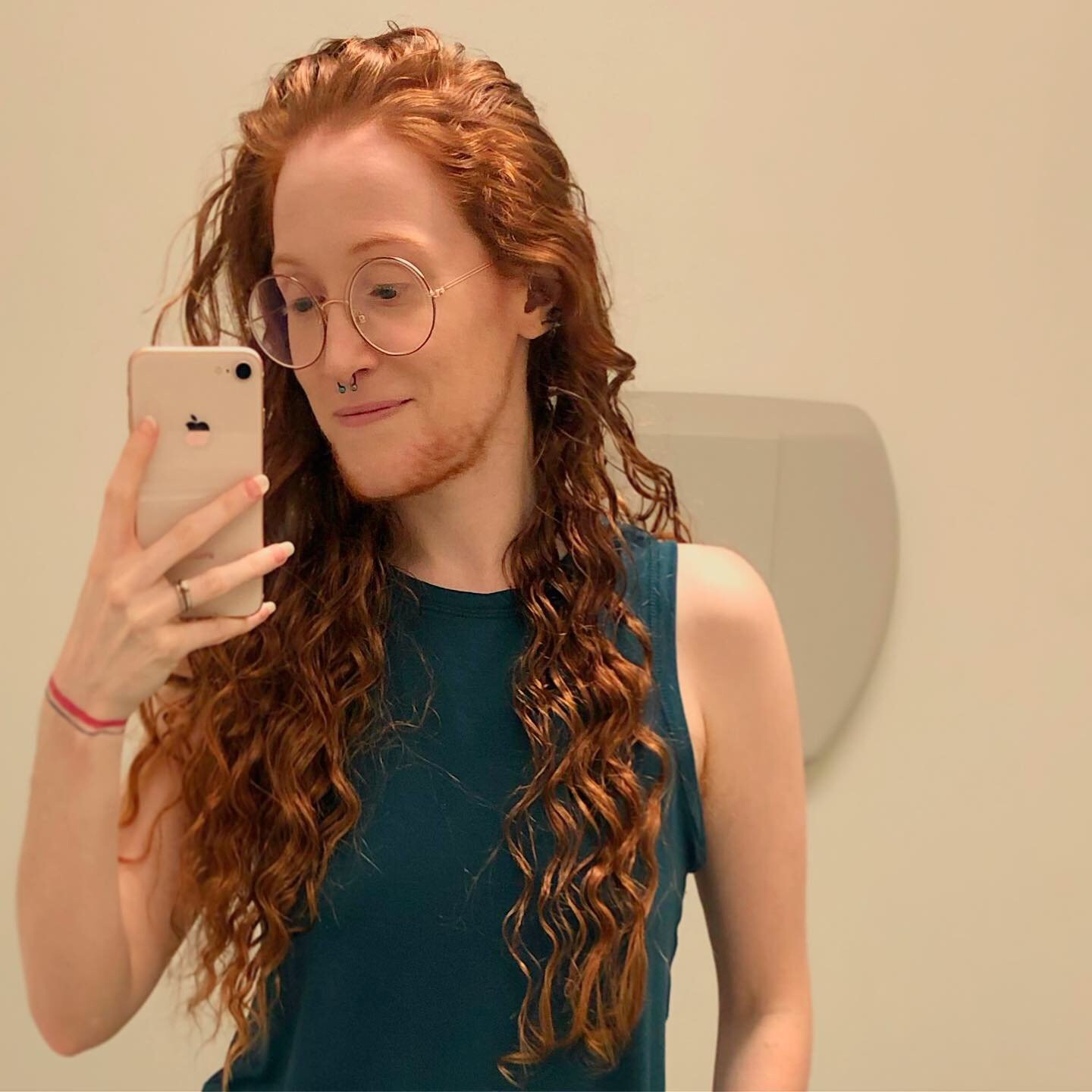 In Phase 2 I came out as nonbinary…thankyou, and again, working out fairly well so far. Pronouns aren’t bothered about, but use they/them and I’ll like you more. It’s a weight lifted – three decades of not being very good at being a woman finally examined. Not wrapped up, at all, everything is a process, but a journey started. And it’s been the beginning (unexpectedly – you don’t know what you’re missing until you’re given it) of falling deeply in love with myself. Sometimes (oftentimes) I’m pretty nervous about how I look. Some places and some times people are super cool, some times and some places not so much. Overwhelmingly people have been very supportive, though, and I love what I am. So whatever the fuck I’m doing is working out, at least for the time being 👌

This year I also 🎉 toot toot 🎉 started psychotherapy, which despite myself (literally, poor therapist) is going incredibly well. Having a somatic, LGBT, trauma focused, spiritually-led therapist to work alongside has really changed everything, everything, in less than a year. Also it’s the hardest fucking work I ever did and I regularly want to sleep for eternity because of it.
I’m still 100% sure it’s 100% worth it 💪 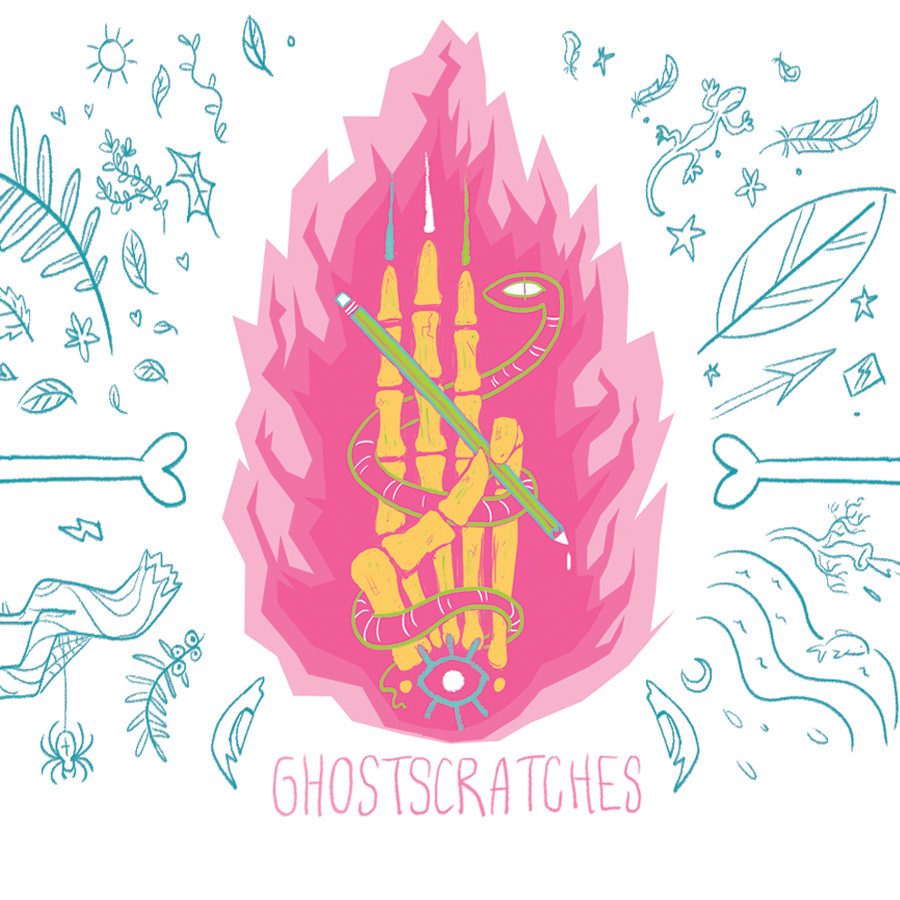 I finally opened an Etsy shop ‘GHOSTSCRATCHES’! 🎉 woah toot toot again! 🎉 This was a gargantuan effort that was at least few years in the making, and it’s far from finished still! GHOSTSCRATCHES will sell whatever we make and want to share with the other children (you). At the moment it’s stickers but we’ll have prints and originals up before the holidays, and hopefully copper pendants and earrings soon after. Basically all the shit I design that brings me joy and/or healing, we wanna share around. Commissions are open but limited as I’m focused on personal and coursework at the moment, but if that’s your bag drop me an email. Otherwise buy our stuff, it means we can make even more even newer stuff, and keeping the river flowing is very important!

I’ve just started the second draft of a long graphic novel project, currently titled “Chiron’s Edge.” It’s a tale of friends with magical powers, a gay love story, a trans prince, and healthy personal development loosely inspired by Internal Family Systems. I will endeavour to show you more soon, but for the time being here’s a rough page from the second draft: 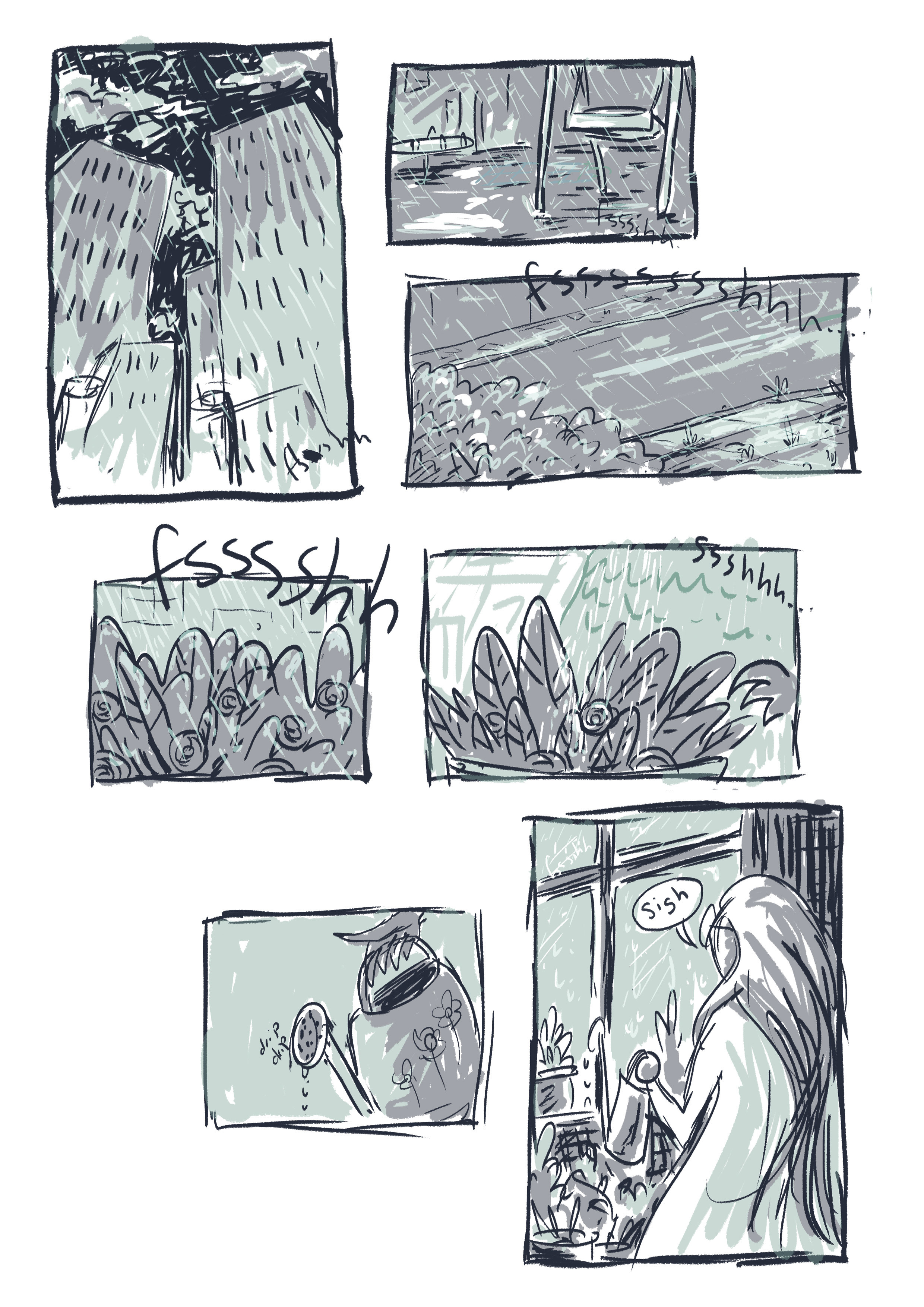 On the subject of making comics, I’m in a new class with the Sequential Artist’s Workshop at the moment, focusing on making emotionally powerful comics. I took a class at SAW last year and was incredibly impressed with how useful it was. And I realised that if I was honest about what I was most afraid to make, it would be comics. Which means I should make them more than anything, obviously.

So here’s some of my early work from the course so far:

We were asked to doodle abstract images and pick some random song lyrics out of a hat. The lyrics and the abstract images are then squished and mished together to build an abstract comic. I traced mine in Photoshop so it’s more legible and also prettier. The process of making these is so delicious, it’s really exciting to see the journey, full of surprises, and I think when we get lucky it produces super exciting, kind of mysterious narratives too. This one came as if from God themselves; I’m working a lot on themes of being asked to ‘bleed’ – emotional voyeurism, ‘trauma porn’ and bonding with others through suffering, so even though it wasn’t planned to relate to what’s happening in my life that’s exactly what happened, and making it was super empowering.

Expect more adventures from my SAW course, for sure.

I’m also giddy to be currently working on my public speaking with the transcendent Australian-English poet Fleassy Malay. It’s a little more out of my comfort zone than the comic class is; we’re working with being seen and heard, and then (the horror,) making videos. Videos of me talking and shit. (I know I signed up for a public speaking class but somehow I wasn’t prepared for how scary this is!) So despite the pit of terror I’m super excited (!!!) to get this medicine for something that a big deal for me and to learn from someone so skilled. I’m sure you’ll get to see the fruits (videos?? 😭) of my labours with Fleassy sometime soon, until then do check out her work. 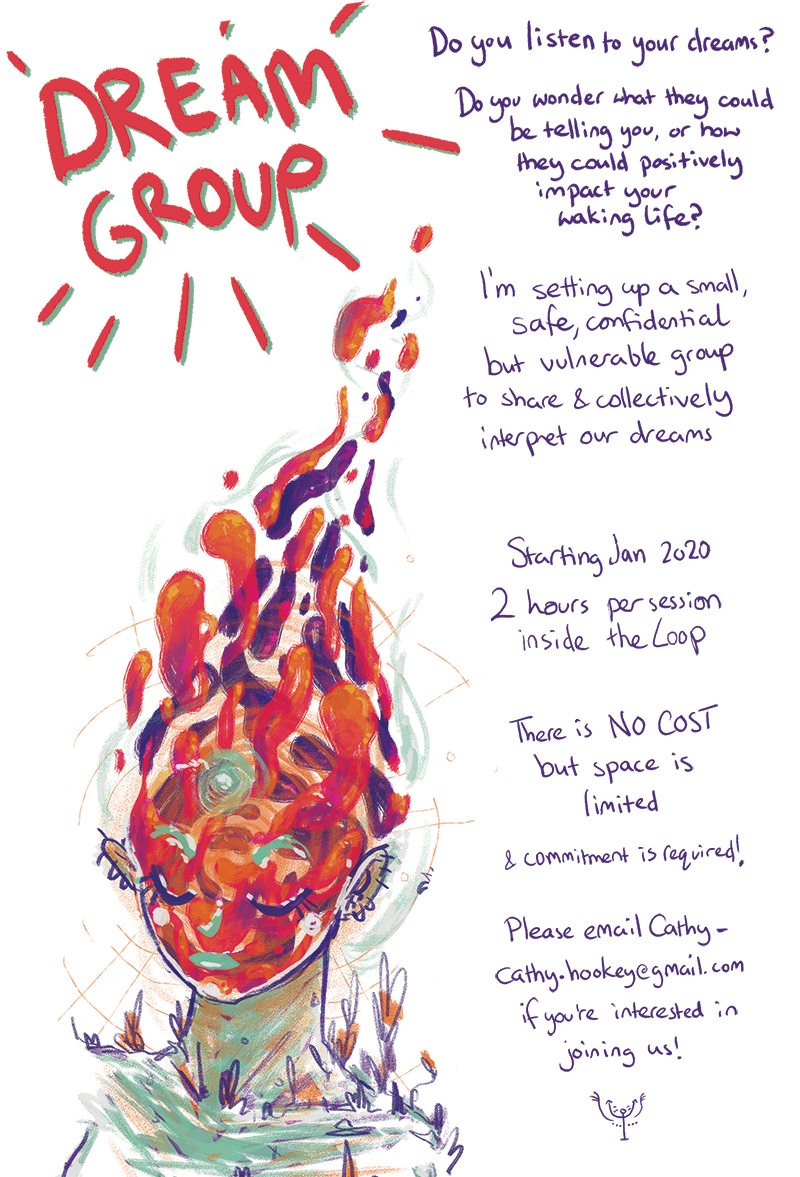 Finally, in case you’re interested and local to HOUTEX, I’m indulging my deep love of the wisdom of dreams (and sleep don’t forget sleep), by summoning a small group to engage in dreamwork together. I plan on mostly following Jeremy Taylor’s framework of ‘projective dreamwork’, but I hope we can experiment with dream incubation, communal dreaming and lucid dreams, too. Very exciting! Dreams and dreaming really are one of my big passions, and I’m stoked to get to expand my dreamwork through community. Drop me an email if you’re interested and in the greater Houston area. I’d like to expand it at a later date but for the meantime I want it to be really quite intimate. I’d planned to start early 2020, but really we’ll get going as soon as we have the right people.

Anyway, missing and loving you, cupcake, sorry again for the extended holiday. But excited to talk again! How’s 2019 treated you so far, what’ve I missed? Are you looking ahead to 2020 yet? Don’t be a stranger, but we’ll talk soon anyway, I’m sure.

Be gentle with yourself, big love,

P.S – Because I read so fucking much I thought I’d share some of my books/thoughts on books in a little trial feature called…

‘Nejishiki’ (‘Screw Style’) by Yoshiharu Tsuge
This was part of my reading for my SAW class, so I got to read the relatively recent English translation of Tsuge’s long-heralded ‘masterpiece’ manga. It is quite an incredible, haunting and affecting, comic. It’s an abstract narrative set in post-war Japan/a dream. The dreaminess of the whole piece is so alluring to me, the oddness of it, the layers and layers of shifting possible meanings, the isolation, the desolation. I’m keeping it close to hand as I start making comics inspired by my own dreams for sure, and reading it over and over and over again. Delicious.

‘he’ by John Connolly
I hope Mr. Connolly doesn’t find out that I’ve had a copy of this since it’s UK release but I got a few chapters in before turning back to my non-fiction comfort zone. And after professing to be such a big fan of his, and everything. I’ve very little knowledge of the era that the book is featured in, which is Hollywood just before, during and after the invent of sound in film, and centers around someone who I only have patchy childhood memories of watching; Stan Laurel of Laurel and Hardy. One of my favourite themes in Mr. Connolly’s books is close male friendship, and ‘he’ centers around Stan Laurel and Babe Hardy’s close friendship through their tumultuous professional and personal lives. I felt like it was going to be worth it even if I don’t know much about the people or the era because I like the theme and I wasn’t disappointed. I read everything Mr. Connolly writes, regardless of subject matter, I just like how his ‘voice’ reads. If I had any criticism it’s that every female character is spoken of unkindly or only in terms of her beauty (or lack thereof). One could argue that’s the point of view being used, and the era. It makes me uncomfortable as I read it, whatever the reason behind it.

‘Pleasure Activism’ written and gathered by adrienne maree brown –
This is the kind of book that’s a bit too immense for me to take in all at once, but maybe that’s telling of my occasionally dysfunctional relationship to pleasure. I’m super cool telling y’all that this book has changed my life. It wasn’t working alone, though; it’s come at a time when many threads in my life are coming together toward similar lessons. I started this just after reading Caroline Myss’s ‘Why People Don’t Heal and How They Can’ (her concept of ‘woundology’ is about how we might say we want to heal but our attachment to our wounds, especially the social capital they garner, keeps us sick in whatever way), and explorations with my Esteemed Therapist around self-worth and scarcity: “Do I deserve to eat blueberries if I don’t X?”

Does growth necessarily have to be painful, are wounds necessarily growthful, does ‘doing the hard thing’, ‘taking the hard road’, or prioritising discipline, productivity and hard graft over pleasure, joy and ease necessarily make for greater/deeper/better personal growth?

In one essay in ‘Pleasure Activism’ (‘Pleasure Over Sixty’), Idelisse Malave introduced me to my new mantra, slogan, fucking life ethos – ‘If it pleases me, I will.’

Which brings up fears/feelings about, ooh, selfishness, greed, being abandoned…

The work is deep, cupcakes.

This site uses Akismet to reduce spam. Learn how your comment data is processed.